According to the customer’s request, an upstream case study might be necessary. Here are some of our studies.

How to fight against bad smells released by waste waters? 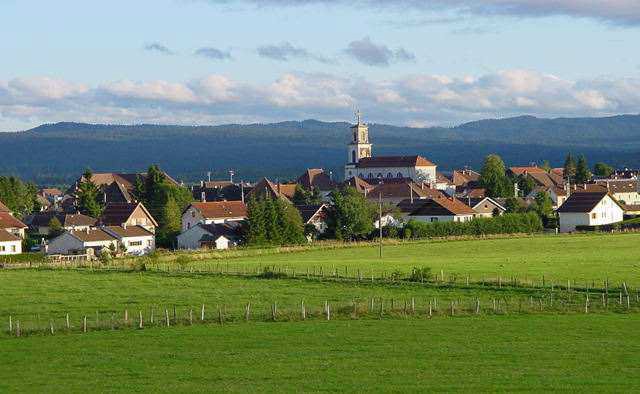 Treatment and storage of industrial or urban residual waters create smelly composites. The bad smells can really disturb the neighborhood.

An odor results from aromatic volatile composites present in the air. During the biological fermentation process, smelly composites are delivered from the waste waters full of organic load. As a result, bad odors emerge.

Many elements from the fermentation of the organic composites can lead to an important olfactory issue:

Three factors are responsible for the oxygen consumption, consumed by the microbial activity: the microorganism’s concentration into water, the water temperature and the biodegradable organic load concentration in the pond.

The natural oxygenation capacity of a pond depends on the surface of the basin, water and air temperatures as well as the atmospheric pressure.

An answer to the odor issues

An artificial aeration (via surface aerators) completes the natural oxygenation of the pond by increasing the quantity of oxygen dissolved in the pond and so leads to favorable conditions for the microbial respiration. As a result, bad smells are avoided.

It is important to care about the number of aerators you need as well as their power to optimize the water oxygenation.

Thanks to its experience in waste water treatment, FAIVRE has developed a wide range of aerators. This French company is recognized worldwide and has innovating solutions to resolve aeration and oxygenation issues and to resolve odors issue.

Since 1950, Saint Louis Sucre produces sugar in Cagny, Calvados (Basse-Normandie). Harvested from September to December, the beetroots receive different treatments to extract their juice and sugar. An important quantity of water is necessary all along this process. The water is recycled during the sugar fabrication and at the end of the production (in January) this water full of organic load and rainwater is poured into two ponds (23 000m3) where waters stagnate until the next harvest in the following autumn. Since 2012, Saint Louis Sucre has received complaints from their neighborhood because of olfactory issues due to waste water. In order to fix this problematic, Saint Louis Sucre called Faivre Group. 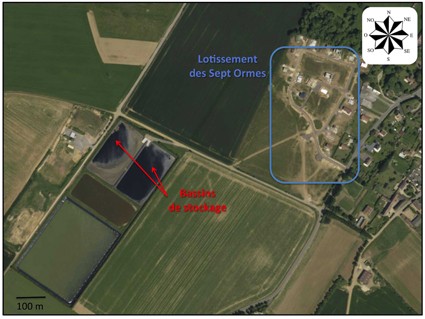 First study: the emergence of olfactory issue around the sugar refinery

After the analysis of the sugar refinery context, FAIVRE made two assessments. First, the complaints for bad smells resulted from the recent building of a housing estate near the sugar refinery. The proximity between this new housing estate and Saint Louis Sucre exposed the inhabitants to most intense odors. Moreover, this phenomenon was emphasized by important winds coming from south/west-south. Those winds drove the smelly odors towards this part of the village.

Secondly, after a telephonic poll the company noticed that even if waters were stocked since January, bad smells were most present during summer. Two factors were responsible for this problematic:

A temporal approach of the issue

A classic approach would have been to bring a higher oxygen supply when the odor issue appears in June. However, the high quantity of organic load of the ponds (DOC = 10g O2.L-1) as well as the high temperatures of the air and water would need powerful aerators to bring the oxygen supply necessary.

The innovative approach developed by FAIVRE was to treat the issue before the emergence of bad smells by optimizing the degradation of the organic load as soon as the basins were fulfilled in January.

These estimations showed that a moderated oxygen supply, adapted to the oxygen supply in January might be enough to decrease the organic load all along the cool period even with a high initial load. When the temperatures become higher, the organic load might be low enough to let the oxygen supply inferior to those of January. Some aerators with moderated power might be sufficient to maintain a level of dissolved oxygen necessary to do not allow the fermentation process responsible for the olfactory problematic.

In addition to the surface aerators, FAIVRE Group also dimensioned every pond (surface, depth, etc) in order to estimate the length of the electric cable necessary. Moreover, in its specifications, FAIVRE promised that the organic load would be reduced near 95% during summer period in order that the odors issue did not disturb the neighborhood.

FAIVRE also committed itself to deliver an operational installation for the next fulfillment of the basins to do not have olfactory issues the following summer.

FAIVRE found a quick and a ready for use solution.

Analysis after a year of exploitation

Thanks to the installation of the surface aerators in both ponds in Saint Louis Sucre, the organic load of the waste waters decreased from 98% the following summer. The decrease of the organic load was better than expected. Moreover, the neighborhood did not complain for olfactory issues anymore. The objectives fixed before the treatment have been reached. Finally, with this approach, the power necessary for the installation of the aerators were twice feeble than a classic approach because the treatment began in cool period. FAIVRE’s experience in aeration field led to the resolve of the sugar refinery’s olfactory issues.

Oxygenation via surface aerators was a solution adapted to odors problematic coming from the ponds or from residual waters full of organic load. Moreover, this method did not need chemical product and did not create negative impacts for the environment as well. 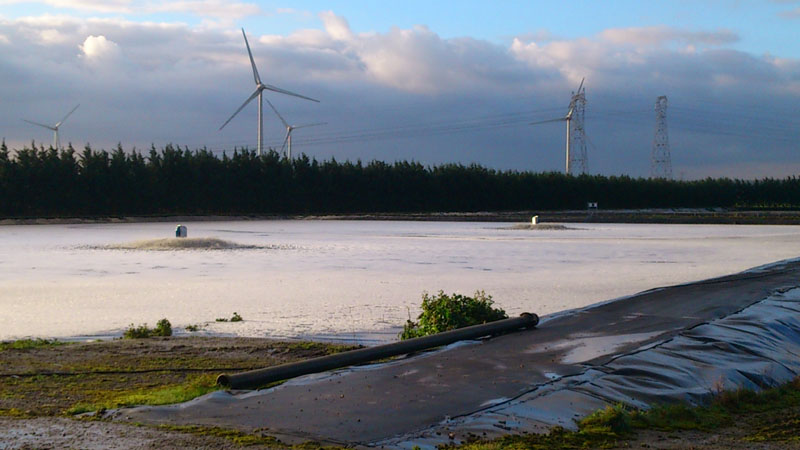 Water is necessary for the fabrication of many products of everyday life such as sugar, oil, paper… However, to use water contributes to its pollution; it is why remediation treatments must be done to limit the impact of polluted waters on the natural environment.

With the fluid discharge standards, industries must find economic solutions to recycle their polluted waters to avoid juridical penalties.

For over 60 years, FAIVRE Group gives advice to industrial companies to help them resolving issues related to the environment.

A plant oil factory located in Africa called FAIVRE to find solution to treat their effluents.

The palm oil is the main source of vegetable fat. The plant oil mill realizes every step which changes a palm in fruits, fibers, juices, oil, sludge, almonds…

A succession of different steps is made according to the following steps, in order to transform the palm:

Study of the issue

The unity of the palm oil production is submitted to the following fluid discharge standards:

The treatment system is divided in 6 ponds: 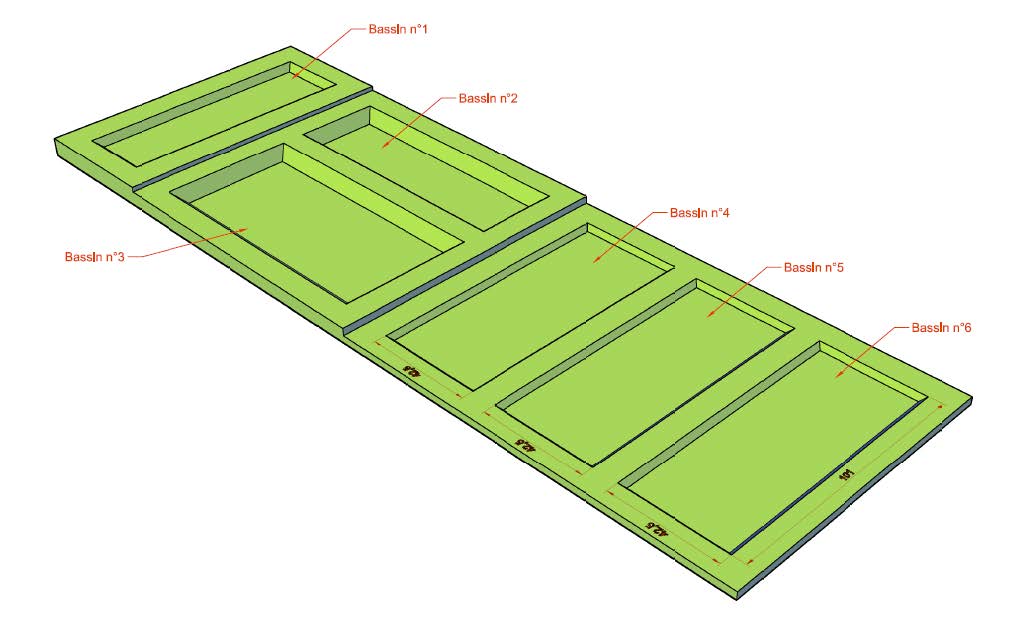 The yield of the initial installation gives the following results:

We obviously see that the plant oil mill is off-standards and the factory must find an adapted solution to treat its waste water.

This study is about the dimension of the aeration area via some surface aerators on the 4th and 5th ponds while the 6th pond has a decanting role.

The whole material is settled and exploited during a year.

Results after a year of exploitation

The solution settled by FAIVRE Group permits to the plant oil factory to become on-standards with the following results: 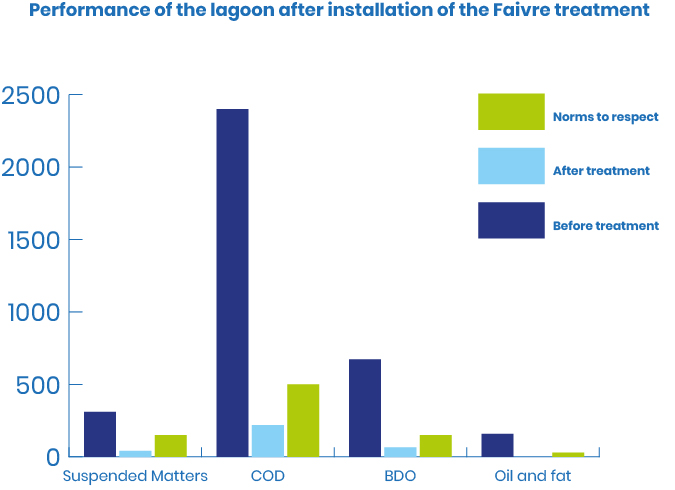 With a purifying yield between 87 and 99%, the solutions brought by FAIVRE permits to the plant oil factory to become on-standards. With an optimized study, only 5 FLOPULSES 44kW are necessary to obtain those results.

Our team is available to answer your questions!

Contact us
We use cookies on our site in order to offer you the best experience by recording your preferences on each visit. By clicking accept, you consent to the use of all cookies.
Find out moreACCEPT
Manage consent

This website uses cookies to improve your experience while you navigate through the website. Out of these, the cookies that are categorized as necessary are stored on your browser as they are essential for the working of basic functionalities of the website. We also use third-party cookies that help us analyze and understand how you use this website. These cookies will be stored in your browser only with your consent. You also have the option to opt-out of these cookies. But opting out of some of these cookies may affect your browsing experience.
Necessary Always Enabled
Necessary cookies are absolutely essential for the website to function properly. This category only includes cookies that ensures basic functionalities and security features of the website. These cookies do not store any personal information.
Non-necessary
Any cookies that may not be particularly necessary for the website to function and is used specifically to collect user personal data via analytics, ads, other embedded contents are termed as non-necessary cookies. It is mandatory to procure user consent prior to running these cookies on your website.
SAVE & ACCEPT